It’s been a busy few days with the arrival of our two new litters of adorable Golden Retriever puppies! Their births on Saturday have brought us back into the fun, full days of puppy season! 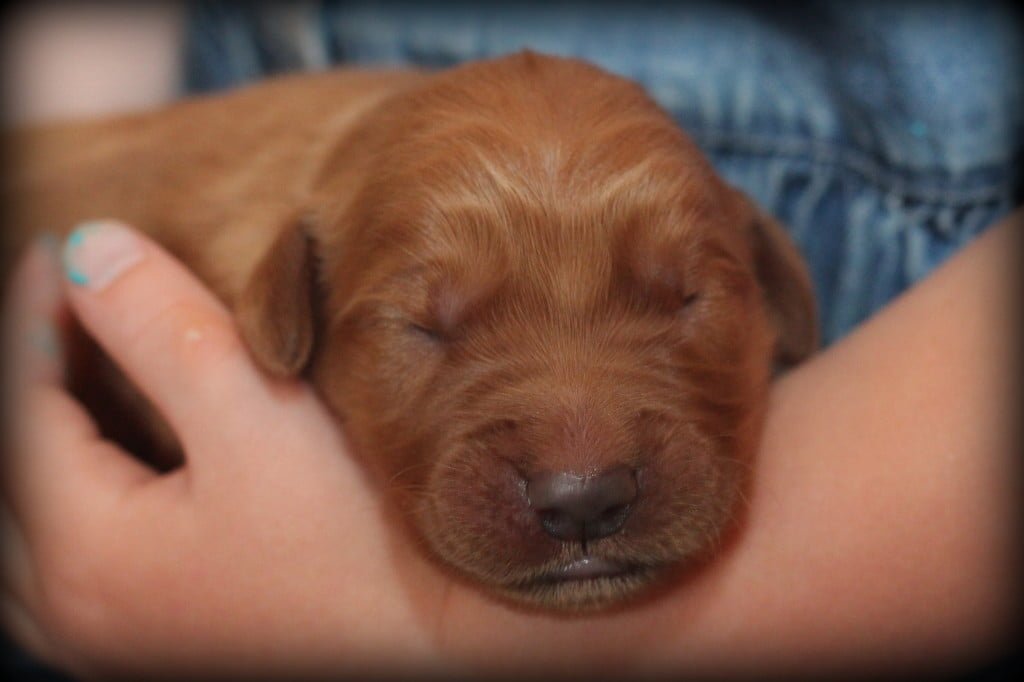 Saturday dawned very blustery though sunny and felt more like an early spring morning than day in June. We’d been waiting for pups for the past several days, and with Saturday as Jenny’s due date, were hopeful for some action. We were not to be disappointed. As per our usual routine, Greg had cared for and taken the dogs outside that morning. Mid-morning, I brought the expectant mothers back to their whelping pens. This time, however, when I had returned to my housework, I heard impatient whining and barking from Jenny. I checked to make sure everything was alright – it was. Jenny was just not settled, and it was then that I remarked to Greg that puppies would probably be arriving soon.

Sure enough, around one o’clock, Jenny’s puppies began to arrive! I got Mary and Jonathan up from their naps, so they wouldn’t miss this special event! Sitting quietly on the edge of the pen, we watched intently as each puppy was born. Jenny handled her labor and delivery so well, carefully cleaning and drying each new little arrival. I had a stack of old, clean towels on hand in case we needed to assist her, but about the only assistance she needed was the set up of a heat lamp due to the cooler temperatures of the day! Newborn pups need plenty of warmth! Just several hours later, Jenny’s delivery was complete. Eight beautiful, strong, healthy pups nestled up to her, nursing contently, while Jenny relaxed from her labors and refreshed herself with a special meal. Later that evening, I ascertained that we had four little girls and four little boys from Jenny! As Jenny had cleaned and dried each pup, I immediately noticed the lovely hues of golds in her litter; several pups are very blond while a few carry darker hues from Shep.

Simultaneously, as Jenny gave birth to her litter, Betsy’s own labor and delivery commenced. Talk about coordinated! Betsy is a pro at this and in her usual calm, steady manner, began delivery of her young ones. The difference between Jenny’s light colored pups, and Betsy’s darker arrivals proved an interesting observation as we watched the births progressing, and made whispered remarks about each new addition. Betsy’s puppies were arriving just as strong and healthy as Jenny’s puppies, and aside from setting up a heat lamp, our job was to sit back and watch! Seven puppies later, Betsy litter was complete, and she also was ready for a special meal and rest while her puppies nursed contently. As I checked each of her cute dark red babies, I had to chuckle with the discovery I made: six girls and one little boy! 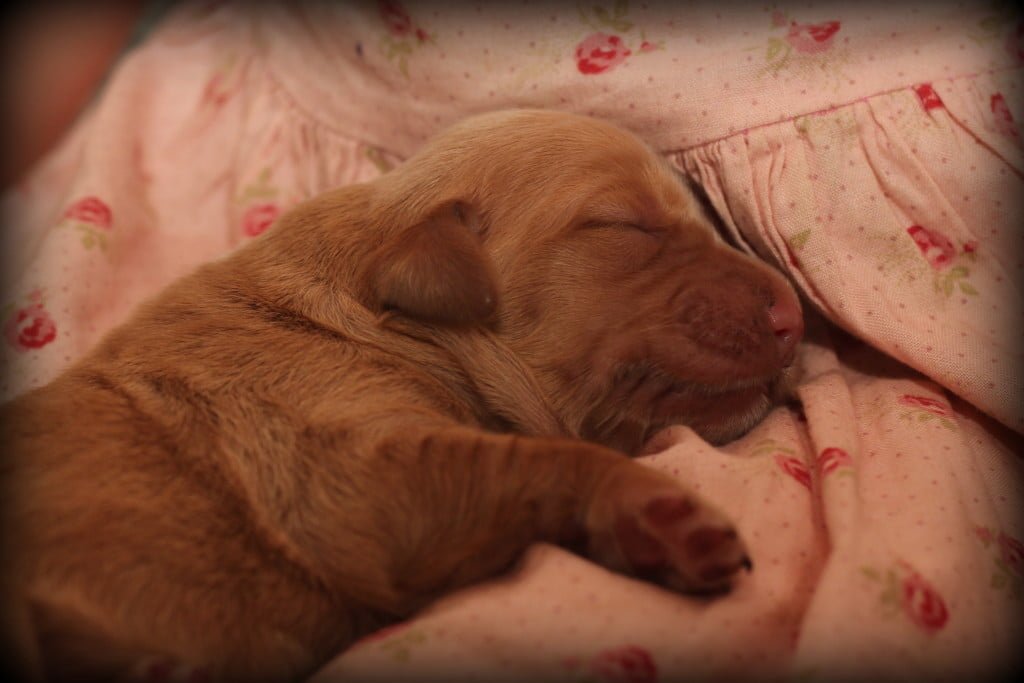 Three days later, Betsy, Jenny, and all 15 puppies are settled into a routine of nursing and sleeping, nursing, and sleeping! Both mothers are fiercely devoted to the care of their litters, and are reluctant to even leave when I take them outside for a little walk and bathroom break. 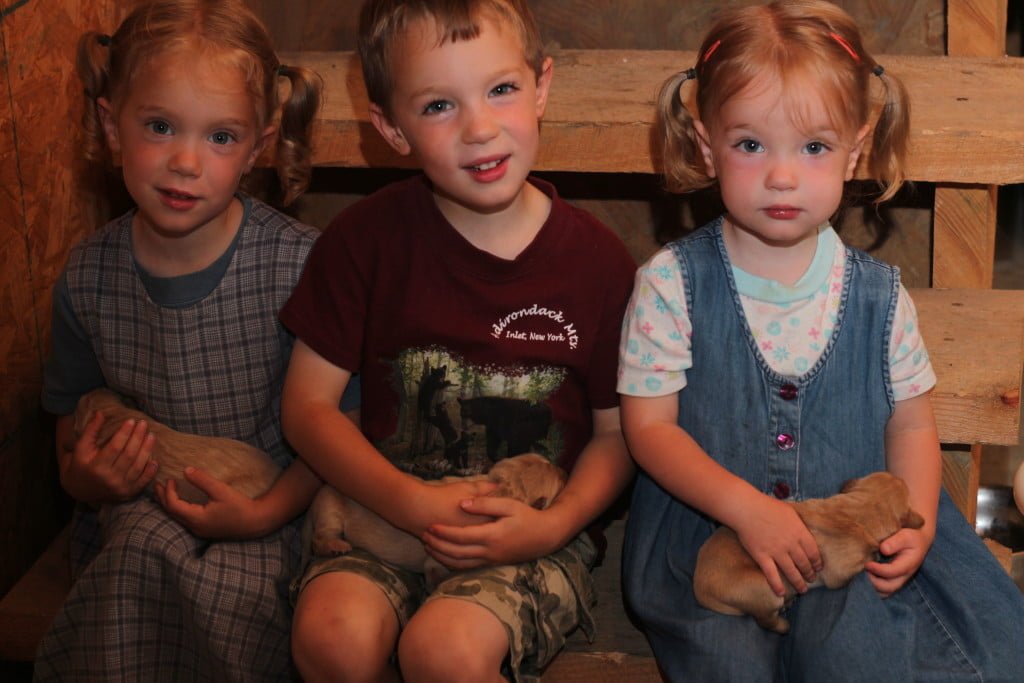 The children have been waiting and waiting to hold the puppies, and were thrilled this morning to have their first opportunity to cuddle a few of the soft, warm, sleepy pups, after we finished caring for the mothers. Ahh…it’s puppy season! Lots of work, lots of fun, lots of love! 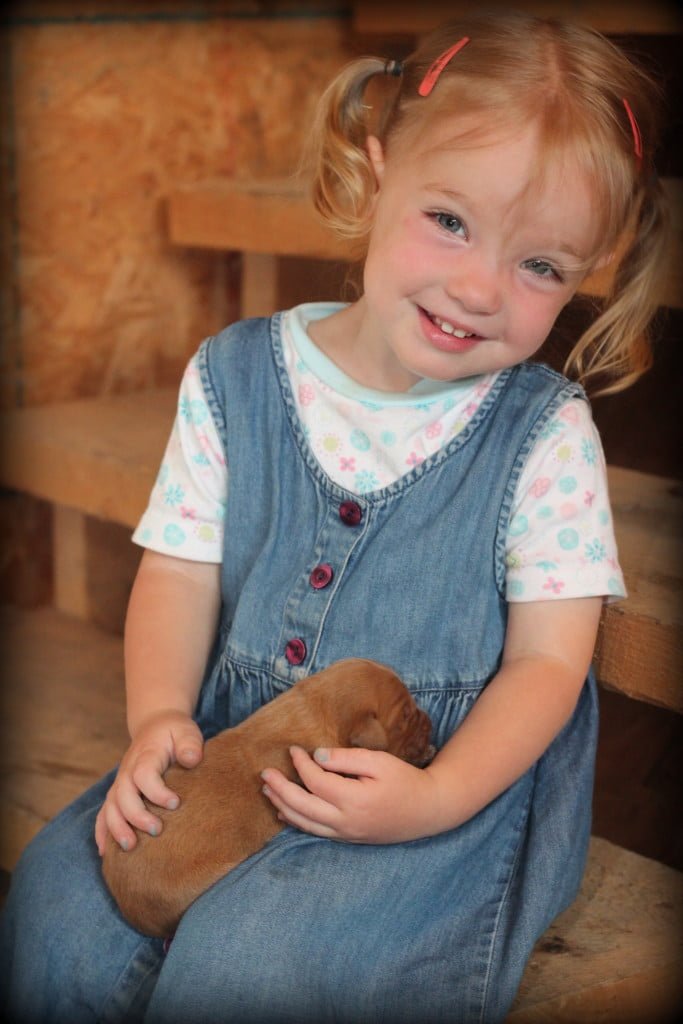 PLEASE NOTE THAT WE ARE CURRENTLY IN THE MIDST OF WEBSITE UPDATES, SO OUR BLOG AND VIDEOS MAY NOT BE FUNCTIONING CORRECTLY FOR A SHORT WHILE. THANK YOU FOR YOUR PATIENCE!